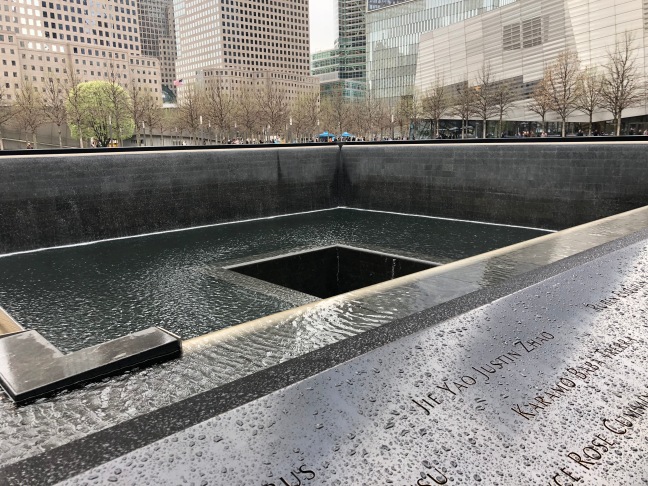 It’s been seventeen years since the unimaginable terror of that nightmare day we refer to simply as 9/11. Sixteen times now we have noticed that day on the calendar and felt that ache of what was lost… so many precious lives, the general sense of safety on American soil, the naive innocence that never imagined it could happen here.

I guess the ache is deeper in my own heart this time having recently visited the site where the twin towers of the World Trade Center once stood. I walked through the streets and felt the gravity of that place just from knowing what had taken place. And, on a cool and rainy April morning, I walked up to the memorial pool in the footprint of the north tower.

(This is a brief video I took as I walked up to the memorial that gives just a momentary glimpse of the sight and sound.)

The names etched on stone, each one a life snuffed out by the insatiable hate of that act, seemed to whisper to me as I glanced across them, longing to be remembered. The sound of the water flowing endlessly through this elegant crater seemed to drown out the noise of the city around us. The realization of what we were seeing and the significance thereof caused people all around to speak in hushed tones and somber demeanor.

We were staying just off of Time Square—right in the buzz and roar and chaos of the city that never sleeps. And here, just three or four miles down the island, it seemed somberly quiet. But I noticed the frequent sirens that rang through the streets, echoing off the buildings, and I wondered if there are folks in the area who, each time they hear that sound, get that anxious pang again just at the audible memory of that September morning.

As I see the numerous memorial presentations being shared—videos, pictures, slideshows, and so on—I see images of the people on the streets looking up in horror. It stands in such contrast to my experience of the crowded streets of New York City. People are usually looking down at the street where they’re walking or the phone in their hand or the panhandler they’re determined to avoid.

Then there are the firefighters and the police officers that I saw all over the city. So many of their own were lost on that terrible day, but they’re still here. They’re still doing the job. They’re still standing watch. They’re still willing to go running in when everyone else is running out. The majority of them, at this point, probably signed on with 9/11 in the past. They knew full well what this work might cost them and signed on the dotted line nonetheless.

Seeing the city for a couple of days and then visiting the memorial, I found the contrast disturbingly stark. But that’s part of the purpose of establishing such a powerful memorial. It is to help people like me who may never have been to that place to remember what happened there. It’s to help the generations to come keep sight of the events of that day and the mark it left on our world.

But that’s also why we put crosses on our buildings and on our jewelry and on our walls and on places built to give hope. Because the cross points us to the one and only hope that the brokenness will one day be overcome, the darkness driven out, and the world made new—better even than it was back in the garden before it was broken.

Why? Because Jesus died to satisfy the demand of justice so that we could receive mercy. And, in His mercy, we find the great grace of a life that will go beyond this broken world into the perfect one to come. It means we have hope for a world with no more tragedy, no more heartache, no more brokenness.

Until that hope comes to pass, we need to remember.

P.S. – If you need to remember that day, this video incorporates so many powerful images with the haunting sound of Disturbed’s version of The Sound of Silence.